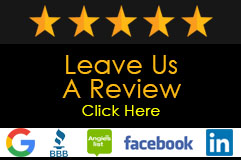 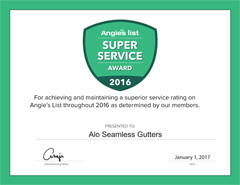 Alo Seamless Gutters doesn’t do just seamless gutters and downspouts. Today we’re going to talk a little about the associated woodwork that we also perform. As most people already know, seamless aluminum gutters are fastened to your home’s fascia (or facia as some prefer). That is the flat board that runs along and below the roof edge, and sometimes has an associated shadow or frieze board as a detail along the top. Improperly installed gutters or old leaky systems can allow water behind the gutters and consequently cause rot on any wood surfaces, and if left unchecked, the water can eventually find it’s way into your home – causing hidden damage as well as obvious signs of water staining. A properly installed system, such as what we specialize in, will eliminate this concern and provide years of functionality with no damage to the home. We don’t do just gutters – we also do the associated woodwork on almost all surfaces that the gutters and downspouts will come in contact with. We have included some pictures of a rotted fascia board and rake end (the piece that comes down the side and runs over the end of the fascias and sticks out past the roof edge) that we recently replaced at a job we did in West Concord, MA. If you notice from the photos, we cut out the old rotted area back to the closest seam (here about 5 feet) and also cut the rake end off as they were very damaged from an old wooden gutter system and replaced them with new, primed and painted wood. Now if your home has wood composite which is getting very popular now (Azek, Wolf and the like), we also work with that. And we don’t stop at fascias or rake ends – we also do cornerboards (the flat wood corners of a home that typically have a downspout attached to them), molding, and shadow (or frieze) boards as well. There are 2 other pictures that show a cornerboard that was rotted and removed and then what the new replacement looks like after we were done. So if your home has an old leaky system (or no gutters at all) and you have suspect areas that could be rot, let us come and estimate the complete job as we take care of not only gutters and downspouts, but also the surfaces on which they are mounted. We also have solutions for roof straps, and depending on the type of shingles, can hide the straps for a more aesthetically pleasing look overall. That will also be the next item for discussion on our blog. We are the rain control experts and can come up with a solution to whatever your gutter needs entail. Give us a call – estimates are always free. 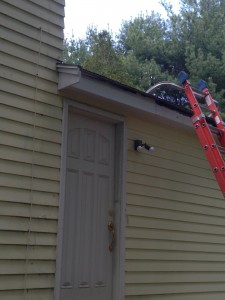 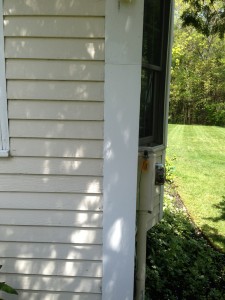 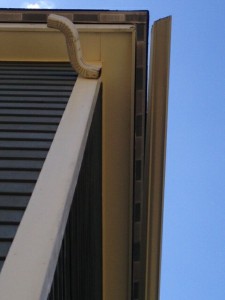 The roof edge and the 5″ gutter that was mounted directly on the fascia. 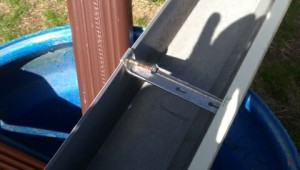 Screw corrosion (used in hanger here) after only 2 years 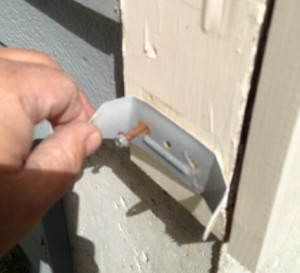 We finished up this week with a gutter removal in Shirley, after having done a few substantial gutter, downspout, and RealGuard leaf protection installations in the Concord Carlisle Acton areas. We also managed to find time to completely gutter a whole house over on Great Rd in Littleton – right next to Gilson Rd, our sign is out front. That’s a nice home that now has brand new seamless aluminum 5″ gutters and 2×3 and 3×4 downspouts, inclusive of some specialty inside mitre work. For those who don’t know what a mitre is (some people spell it miter) – that’s the specialty aluminum piece that stitches together the 2 gutters that come together at an angle. Check out the home if you’re in the area. This week I’ve included a couple of pictures from a removal we did on Friday in Shirley. We had been to these people’s home the year before to estimate what a complete job would be because the existing system was installed so poorly and unprofessionally, but the home was s till under warranty. Well, after getting little resolve with the new home contractor and forced to live with such a poor system for so long , we were called in to completely remove the old system. The homeowners had been so aggravated with how the system did not work and actually caused problems that they no longer wanted any gutters whatsoever. And we understand just how frustrating this can be. You’ll see in the pictures how the gutters were just mounted to the fascia, a good 4-1/2″ in from where the shingles end and where they should have been mounted. That’s all because the home has roof edge venting, or Hicks vents, so the fascia board is well back to allow room for the vents, and specialty wood or Azek-type composite build-out is critical. None of this was used, and so the system couldn’t catch hardly any water and made things even worse in the winter. Not to mention that, as is seen in the other picture, non stainless steel screws were used for fasteners. They rust – and as the other 2 pictures show, that rust will bleed down your fascias, cornerboards, trim, and eventually the screw will rust out. We use only non-corrosive stainless steel screws for fastening and we guarantee our systems not to rust anywhere. Now what I want to understand is how a major gutter installation company in the northeast can put up systems like this and feel good about themselves? These poor homeowners are now so un-enamored of gutters that they won’t even consider getting anything done – at least for now. We’re not the biggest by far, but we do consider ourselves honest and reputable professionals who also happen to do a damn good job. Joe Alo oversees all the work on a daily basis, and under his supervision the job gets done right, and gets done right the first time. And it galls him to think that supposed “big experts” can do such inappropriate and shoddy work. But this is what happens when someone tries to take shortcuts. Anyways, we’re off for a vey busy week next week in Concord, Acton, and Chelmsford, with stops in Arlington and Shrewsbury. Lots of new seamless gutter work, lots of downspouts, some eggshell colored systems, some reverse flashing, and even some more RealGuard leaf protection. I’ll check back next week with an update of a very special upcoming job. 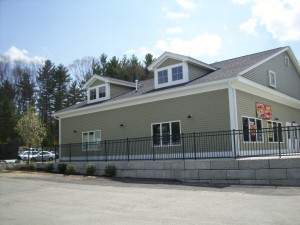 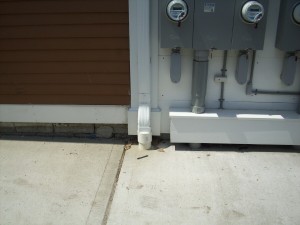 This past week we have installed a 6 inch commercial sized gutter on a business at Kelley’s Corners in Acton. As you can see from our pictures, we also used the larger sized 3×4 downspout as well as an in-ground drain adaptor. The span was long and required the 6 inch gutter rather than the 5 inch residential sized gutter because of the size of the roof, the size of the fascia, and the demands upon the system. Stop by when you’re in the Acton area – it’s right next to our friends at the Acton Bowladrome, at the new building that’s housing Sorrentos. We do have some homeowners who also either ask or require this size seamless gutter in certain areas of their home, and we carry all the aluminum products necessary to do the job right and professionally the first time. Our free estimates will evaluate your current system (or lack thereof) and propose the best possible options from gutter repairs and replacements to entire new rain control systems. With the combination of the super tough 297 lb. test bar hangers called HangFast and our stainless steel tacks in between all hangers, you can rest assured that the gutters are tight to the fascia and won’t come down over time. Because of our proprietary install technique, other competitors have adopted similar techniques because of just how good our gutters and installations are. Don’t be fooled, however. There are a lot of similar looking systems that just don’t measure up to us when you compare apples to apples, and our crew takes great care in all the work we do. After all, we’re homeowners ourselves and understand just how important it is to have things done right and done professionally the first time. Keep looking at the blog – next week we’ll be in the Shrewsbury, Hudson, Arlington, Concord, and Chelmsford areas with some great specialty work we’ll be showing right here. 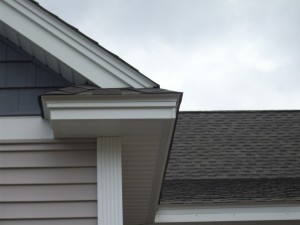 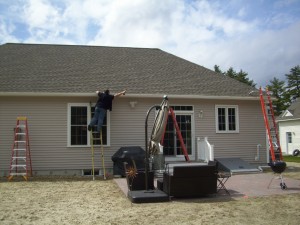 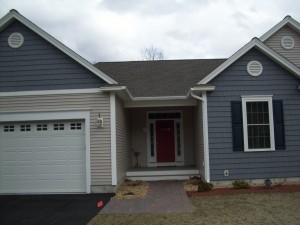 Welcome to Alo Gutters blog. We have recently opened for the work season and are very excited about our prospects. Last week we completed several gutter jobs in the Acton, Harvard, Concord, Bedford, and Shirley areas, finishing up the week in Ayer. I’ve attached some pictures of our Friday work in Ayer – a nice new home over on Easy Street that required some Azek-type build-out (adder board). As you can see from the pictures, we added the Azek-type composite material to the bottom of the fascia to build-out the surface, allowing us a nice wide plane on which to mount the gutters. The board is about 2-1/2″ wide, and mounts on the fascia below the shadow or frieze board – you can see the end in the picture. This is necessary for proper pitch, especially along the very long back section. You can see the completed front section in the pictures here – complete with miters (angled meeting area of a gutter run) and a downspout that has been side-mounted and with extensions along the front to assist with proper water discharge. The homeowner now doesn’t have to worry of being deluged upon when entering or exiting her home during periods of rain. We fastened the composite material with spiral nails to ensure no movement over time, and because the material is no-maintenece, should last a lifetime with proper care. As you can see, we are able to fabricate a seamless gutter to almost any length. Add our 297 lb. test bar hangers, stainless steel (#440) tacks in between, and you are ensured of a rock-solid installation that won’t come down even under snowy and icy winter loads.

Please remember that all gutters do need routine maintenance to last a lifetime – this includes regular cleanings to ensure proper functionality. We also perform cleanings and evaluations for those homeowners who are not comfortable getting up on a ladder, and we guarantee our work as always. If you want to cut down on the regular cleanings, we also install an all-aluminum leaf protection system called RealGuard that works hand-in-hand with our installed gutter systems. And while RealGuard will not completely eliminate all cleanings, it goes a long way to reducing the times between cleanings as compared to unprotected gutters. And the RealGuard is specifically designed for not only regular broadleafs, but pine needles and maple “twirly-birds” as well. And we’ll guarantee nothing inside the gutters – only on top, for easy removal.

Check back for more seamless gutter updates and further pictures of our work.

This is the new blog page for ALOGutters.com. Check back here for news and updates on the latest projects that we are working on – we will be posting new photos and descriptions of our quality work here periodically.

Don’t forget to check out our reviews over on the Testimonials page. We’ve received a lot of great feedback from our customers over the years.